Tears on a Weekend

Anyone who knows our six year old little girl knows that she spent the first four years of her life imitating her older brother. She had a room of everything Batman and wouldn’t be seen near anything pink. About two years ago, however, she started to take some interest in things that Teddy didn't necessarily love, like gymnastics. I understood her love for gymnastics, as I grew up loving it, too.

Last November, after I played a small (non-dancing) role in a fundraiser organized by a dance studio in my town, Annabel (newly unafraid of girls) decided she wanted to dance, too. We got her started a few weeks later and every Monday for 45 minutes, she trades her hockey-themed t-shirts and sweatpants for a pair of tights and a pink leotard that our neighbor gave us.

Saturday afternoon as it poured buckets outside, Annabel practiced her “routine” for the end of the year dance recital that would be later that night. She had the music going in the basement and told us that we couldn’t go down because she was pah-WACK-tiss-ing. We really wanted to peek but we didn’t.

We had a nice family dinner before the recital. Annabel was blessed to have two parents, four grandparents, and her big brother in attendance to see her two-minute performance amidst dozens of other (far more advanced) dances.

We waited anxiously for her to emerge to the Giggle Bellies’ song “All the Little Raindrops.” For the first six songs Brian and Teddy whispered to me, “Is this her?” Finally, she was up and all the little raindrops hopped on the stage…with the exception of one. My heart sank. I finally spotted her snuggled up next to the studio owner in front of the stage. Annabel stood there watching her friends perform.

When I found her backstage, she was hysterical again. “I was going to frow-up,” she explained through her tears. “And I didn’t want to frow up on the stage.” The poor little kid had never felt nervousness like that before and I was disappointed in myself that I never prepped her for that feeling. Oops.

On the way home, she continued to cry hysterically. We tried reasoning with her but nothing worked. So I pulled out the only thing I knew would make her laugh – a good ole story about, well, farts. Of course, it worked like a charm. I told her about one of the most embarrassing moments I had ever experienced as a little kid, when I was about nine years old. I was performing in a gymnastics meet, doing my bar routine, and I let out a little toot that was just loud enough for the judges to give me a deduction. I've never told anyone about that awfully embarrassing story but low and behold, here I was re-telling it in all my glory to Annabel as I sat with her in the backseat. She couldn’t stop laughing at that story and my heart mended in those laughing-tears. We saw a rainbow just a few miles away from the house. 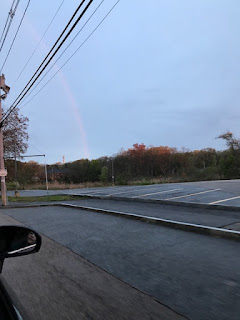 On Tuesday morning of last week, Brian lost one of his very best friends. It was instant and utter heartbreak. I met Tommy 19 years ago, just after I met Brian. Obviously I didn't know Tommy a fraction of how well Brian did but from the day I knew Brian, I knew that he loved Tommy like a brother. During high school when Brian didn’t have many friends, Tommy reached out and befriended him. Tommy brought Brian into his close-knit group of friends and Brian had a pal (and a group of pals) for life. Brian and Tommy had planned to get together last Wednesday night to catch up. Tragically, Tommy suffered a fatal blood clot on Tuesday morning as he left the gym. Countless hearts broke at the news of his passing.

I have never been to a wake like Tommy’s this past Sunday. So many friends. So many tears. Such ... I don't know ... sudden emptiness for so many people. Devastation that he didn’t get to celebrate his first anniversary with his new wife who he absolutely loved. Denial. Shock. The same question over and over -- Why? Why? Why?

I couldn’t help but watch his wife and his sister yesterday as they stood in that wake line for five straight hours. I thought about how they were living my worst nightmare. I wondered how they were still standing. How they would pick up the pieces. Why. Why. Why! I have never seen my husband sob like he has over the last few days. The tragic price for the truest friendship.

On Sunday night just before bed, Annabel came up to me and announced that despite her prior plan to skip her Monday afternoon dance class, she now wanted to go. “I want to go because of what happened at the recital.” She proceeded to explain to me that she didn’t want to be scared but she wanted to go back and try again for next time. I told her exactly what I felt in that moment: that I have never been so proud of her.

Right now I am sitting outside the dance studio and Brian is with his friends at the post-funeral gathering. I’d guess they are wandering in between laughter and tears like they did yesterday at the wake and even today at the funeral. I know their hearts are broken and I wonder if and how they will ever mend.

Meanwhile, I find myself scared. Sad and scared. Sad for those around me and elsewhere on this planet who suffer – from grief, from war, from cancer, from life. Scared that one day I could lose my best friend, my husband, my brother, or someone else so close that I wouldn’t be able to get back up again (I can't even mention my children). Scared of dying, and scared of living.

Before we left the house for dance today, I put a blank Thank You card on the kitchen table and told Annabel that it would be nice if she wrote her dance teacher a card to thank her for helping her when she was upset at the recital. I didn’t say another word and neither did Annabel, until she was done and she handed me the card. 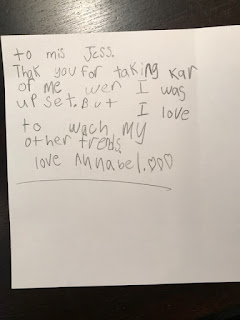 In the end, I guess all we can do is be there for one another when times are tough. Obviously a dance recital isn’t life, but to Annabel at that moment, I think it kind of seemed that way. And so I'm forever grateful for the women who comforted her before I could, who told her it was okay that she couldn't make it on stage.

I know that one day there could be a time when I can’t be there to tell my daughter fart stories and make her laugh. But I also know that this world is full of so many good people who would take care of her if I couldn’t. I know that the world is tragically unpredictable. But I know that loyal friends, other moms, dance teachers, and even strangers, come out of nowhere to help. It’s that loyalty and that kindness that made so many weep for Tommy. He was so loyal. He was so kind. He’d have had a good (and sympathetic) laugh with Brian if Brian had a chance to tell him about how the recital went down for Annabel. He would have loved the card Annabel wrote to her dance teacher. But I love to watch my other friends. Because that was Tommy – he loved to watch his friends smile, laugh, and succeed. And despite that we all wish otherwise, now he has a seat in Heaven on which to do just that.
Posted by Tara at 4:30 PM No comments: