Over 7 years ago, after surviving my second chemotherapy treatment in the ICU at the Brigham & Women's Hospital, I wrote a blog that began as follows:

Most of the time, I'm pretty skeptical of advice. I much prefer observing a person's actions or listening to his or her opinion on an issue over hearing a blurb of advice. That's not to say that I don't want to learn from someone else's experiences because I definitely do. I'm just not crazy about boiling down those experiences into a neat little package of advice.

A lot has changed in those seven years but a lot has stayed the same, too. I still prefer actions to opinions and I still do not feel right giving advice to other adults as if know what's best for them. I'm a teacher now, having left the law years before I paid back my loans, and I have no new degree that makes me even the slightest bit qualified to talk about the global pandemic of COVID-19. Instead, I have spent the last 4.5 years teaching English and SAT prep to high school kids in Boston and shockingly, that experience has not made me an expert on what the f*&^ we should all be doing right now.

Until last Friday, I got to spend my weekdays with brilliant teenagers who are figuring out life. I tried to convince the doubters to love reading as much as I do, and I cherished nerdy after-class conversations with the ones who already found that love. Best of all, I learned from those kids and from my incredible colleagues. In this, my 11th (non-consecutive) year teaching, I started to learn what seems to be the most important lesson so far: that I cannot do anything right for my students if I don't listen to them. Like really listen. So I have tried to ask more questions and hear the answers with my mind, not just my ears. I struggle to hold my own thoughts inside (because I have far too many thoughts to reign in), so I nod and I keep listening. It's crazy how much you learn when you listen.

In my job, I have also improved (though very much not perfected) how to accept when I'm wrong. Damn, that's hard every single time I have to do it but I will say, with practice, it's gotten a lot easier. Which is good, because I seem to be wrong more and more often as I get older.

One very long week ago, on the evening of Monday March 9th, I was feeling overwhelmed. I would turn 40 the next day, and when I was diagnosed with triple positive breast cancer at age 32, I always had my heart set on 40. "My kids will be older, then," I told myself. Now I was staring down the goal. I felt like Gatsby and the green light: "Possibly it had occurred to him that the colossal significance of that light had now vanished forever." (Thanks, F. Scott Fitzgerald)

Anyways, that night, I was scrolling through Facebook and saw a fellow breast cancer "survivor" (Dr. Britt Lee) post advice on how we should all start cancelling events, trips, and even small gatherings (her blog here). After I got through about half of it, I was pissed. How dare she over-react this way?! How dare she say we should cancel things that we need to do? How dare she not think of less privileged people in the world whose problems were so much bigger than a rescheduled piano recital or ski trip? As I read, my tunnel vision got more and more narrow. Ultimately, I snapped at her over Facebook while Teddy and Annabel were getting ready for bed. I called her out on privilege and (oops) made rude references to her rich friends in Chestnut Hill. I knew she had earned her PhD in immunology but I didn't care. I was mad and scared and I decided to take it out on her.

I felt empowered to act that way because I thought that people needed to know that Dr. Lee was not "all there." I remembered why I had pretty much cut off non-Facebook contact with her years ago after she gave me advice during chemo: she told me to stop doing things I wanted to do so that I would stop collecting germs. She told me I had to stop going places in large groups, exercising at gyms, and handing over money to people on the street. "F*%* her," I thought. "I will take on whatever illness those germs bring if it means that I don't have to miss these things." So I went to a Thanksgiving Day football game and I hugged and kissed all my relatives in large family gatherings. She was a wimp and I was awesome. So I thought.

By the Friday after Thanksgiving, my fever soared. I have never felt so sick. I landed in the ER with an Absolute Neutrophil Count (i.e., white blood cell indicator) of ZERO. I was very ill and doctors could not find the source of infection.

It would take a five-day hospital stay at the Brigham to make me better. That hospital stay wasn't fun but it was necessary. My nurses and doctors gave my body all the medicine, time, and attention that it needed to fend off the infection and make me able to fight regular germs in the world again. I missed my kids terribly during that time. But before I knew it, I was back home.

So, back to last week... After I over-reacted at my keyboard, I fell asleep beginning to worry about the state of the world but not at all worried about anyone's reaction to my harsh social media comments. I'm a high school teacher; I can handle a pretty good amount of attitude.

The next day, I read through some reactions with a chuckle. Meanwhile, I wanted to dig my heels in. Fight back. Be witty and sound sassy. But there was just one problem. I was wrong.

I kept reading articles, kept listening to medical professionals in the United States and abroad, and considered the fact that maybe this woman had a point. Maybe this COVID-19 thing was bigger than I thought. I read more. I kept an open mind. As I educated myself, the adrenaline pumped on high gear. At times, my anxiety made me feel short of breath and shortness of breath only made the anxiety worsen.

It didn't take long before I understood: Dr. Lee was so far ahead of me in grasping the gravity of this situation. She, and so many others, were trying to help us because the government was stagnant, and we did not know enough to help ourselves. She was trying to share information with anyone who would listen. And I was one of those people who needed to listen.

The problem, as I see it as a teacher and only a teacher, is that we need to talk and teach more about listening, reading, debating without rancor (Dr. Lee's word). This doesn't mean staying quiet while others speak (although that's important), but it means considering the views of others. It means wanting to be around (perhaps, only virtually) people who know more than we do. I'm not very good at it. But this week, without any grace, I did it.

Since then, I have read the news obsessively. I have read everything I can about China and about Italy. I cried in front of my students on Friday because I am worried for them and I knew that I wouldn't see them for a very long time. I figured that the book that I hurriedly gave them to read, Catcher in the Rye, would likely be the last book I gave them this year.

In planning to preface Catcher in the Rye for them, I found myself back at the last blog I posted in this space. It was called Catcher, and I wrote it almost one year ago, after a 28-year-old friend of mine, Justin Perry, died of lung cancer.

Lately I have been thinking a lot about Justin. He was so young when he died and until the very last photos I saw of him, he looked so strong. But his lungs were not strong. They were riddled with cancer. I can only make the educated guess that Justin never could have survived COVID-19. We all need to do more for those like Justin who, right now, must be absolutely terrified.

Meanwhile, while Massachusetts and others states gradually lock down, I see people still in denial of the seriousness of this situation. I know it's scary and I wish we could all deny it. But we can't. It's here and it's time we face it like adults. And adulthood is not easy. Actually, many times, it really sucks.

Nevertheless, an important step in acting like adults is admitting when we are wrong. Years ago, I should never have been such a cavalier cancer patient who almost consciously thought things like, "Bring on the illness; I can take it." I should have said "no" to games and parties, and protected myself like Dr. Lee said to do. I should have avoided germs and not wasted resources at the hospital. Instead, I brushed off Dr. Lee and categorized her as an elitist germophobe with whom I couldn't be friends.

Maybe Dr. Lee and I won't ever be friends beyond Facebook and that's perfectly okay. But I can most certainly admit that she taught me a lot this week, about myself at 40 and about myself back at 32. She taught me that nobody wants to realize his or her own vulnerability. To varying extents, we all struggle to fathom having an illness for which there is no cure. The more privileged, including myself, assume access to certain things, like health care. But many cancer patients, including myself and (I'm guessing) Dr. Lee, have faced the reality that even a strong body cannot handle everything that this crazy world may throw at it.

Eight years ago, when I was immunocompromised and stubborn as all Hell, I figured the hospitals would have whatever I needed to get better if I got sick. At the time, they did. But in the coming days, weeks, and months, they won't. Instead, doctors and nurses will decide who falls off the cliff and who they can try to catch. Those brave men and women on the front lines will be the catchers in the rye. But unless we do our part -- listen, sacrifice some things, and admit when we are wrong -- there will not be enough catchers and the cliff will be a deep, deep, dark one. 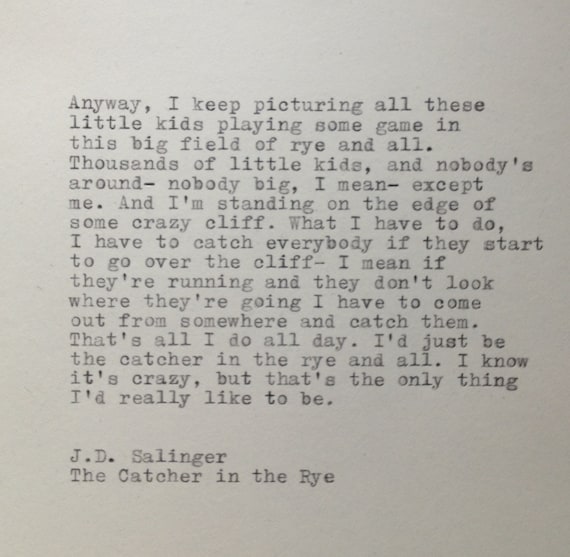